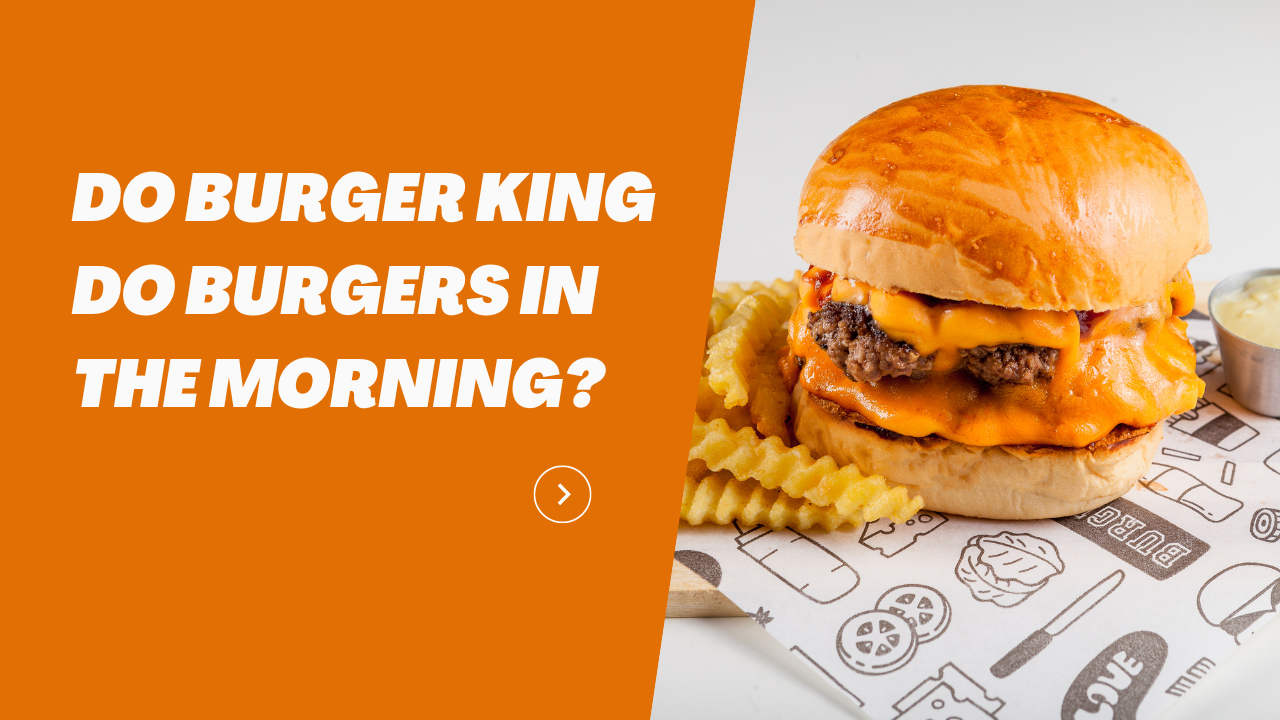 Burger King has the word “burger” in its name, so, it would be weird to get there at any time of the day, only to discover that burgers are not available. At the same time, it’s clear that most people see burgers as lunchtime food, so it will also be somewhat weird if Burger King serves a huge collection of burgers for breakfast.

That puts the restaurant in a somewhat difficult position, but what did they eventually choose to do? Did Burger King choose to serve burgers in the morning anyway, or do you have to live with some weird menu items until the afternoon when they start serving their iconic burgers?

In this article, you’ll learn if Burger King serves burgers in the morning. Also, I’ll answer some of the other questions you might have about the restaurant’s breakfast menu, especially the ones relating to getting a burger at odd times.

Lunchtime at Burger King differs slightly across outlets and states. Like pretty much every other big restaurant chain in the United States, most of the branches of the fast food restaurant are neither owned nor managed by Burger King; instead, they’re owned by independent franchisees who pay to use the BK branding.

For that reason, lunchtime can be anywhere between 10 am and 11 am, depending on what part of the world you live in and the policies of the management of the outlet closest to you. If it’s 10 am already, you may want to call the restaurant to ask if it’s still too early to order from the lunch menu before deciding.

Also, the fact that it’s still breakfast hours doesn’t mean it’s impossible to get some lunch items from the restaurant. Burger King recently initiated a “Burgers for Breakfast” program that made it possible to access some of the lunch items at the restaurant in the morning, especially burgers.

You may want to confirm if the closest BK outlet participates in that.

Do Burger King Do Burgers in the Morning?

If you read the preceding section to the end, you should already have your answer to this question. However, since Google is notorious for jumping you to the crucial part of an article, I’ll answer the question in detail and make some clarifications.

Most Burger King outlets do serve burgers in the morning, even as the food is regarded as a lunch item in the restaurant. The reason why they do so is due to the high demand for burgers; I mean, there’s “burger” in the restaurant’s name, so they’re almost forcing it down your throat.

Since many of their outlets are already serving burgers to customers for breakfast unofficially, Burger King decided to sanction it by introducing the “Burgers for Breakfast” program. As you might have guessed, this initiative simply lets restaurants serve burgers for breakfast without breaking any rules.

Before walking into any BK outlet to request a burger at 7 in the morning, you should know that not all of their branches participate in the program. So, you may want to call before ordering to ensure they have burgers for breakfast.

Can You Order Regular Food at Burger King in the Morning?

When people use the phrase “regular food” with fast food outlets, it’s typically used to mean the main food items. In the case of Burger King, it’s referring to items like the Whopper, and all the other burgers BK serves as its flagship lunchtime menu items.

As you already know, it’s possible to order a significant number of these items in the morning, all thanks to the “Burgers for Breakfast” program. Before making an order, you may want to confirm if the Burger King outlet nearest to you is participating in the program since only then can you access those “regular foods in the morning.”

Can I Get a Whopper at Burger King in the Morning?

In times past, no Burger King restaurant was officially allowed to sell Whoppers in the morning for a simple reason: it was on the lunch menu. No thanks to the high demand by customers, however, most outlets found it virtually impossible to abide by that rule.

In response to that, Burger King simply started the “Burgers for Breakfast” program, which made it possible to access most of BK’s burgers, including the Whopper, in the morning. Now, you can safely assume that almost all Burger King outlets offer the Whopper as an all-day menu item.

When people learn that burgers weren’t always everyday items at Burger King, there’s always a follow-up question. The question is predictable and logical, and unless you have a Burger King outlet in the Burgers for Breakfast program nearby, you’ll also want an answer to the question: what time does Burger King serve burgers?

Most of the burgers at BK are on the lunch menu, which makes them only accessible in the morning. Lunchtime at Burger King differs across outlets, but you should expect it to be 10:30 am or 11 am, which is exactly when the restaurant officially starts serving burgers, in addition to the rest of the lunch menu.

However, if you’ve been paying rapt attention to this article, you’ll notice that waiting until 11 am for burgers is so outdated. With most Burger King branches serving burgers for breakfast, you can now access the food item whenever you walk into the restaurant.

Does Burger King Serve Everything in the Morning?

Does Burger King have a $5 meal deal?

Historically, you could only access burgers at Burger King in the afternoon, but customers were finding workarounds. When the demand for burgers for breakfast started to skyrocket, Burger King launched a program aimed at making it official, and now, most BK outlets officially do burgers in the morning.