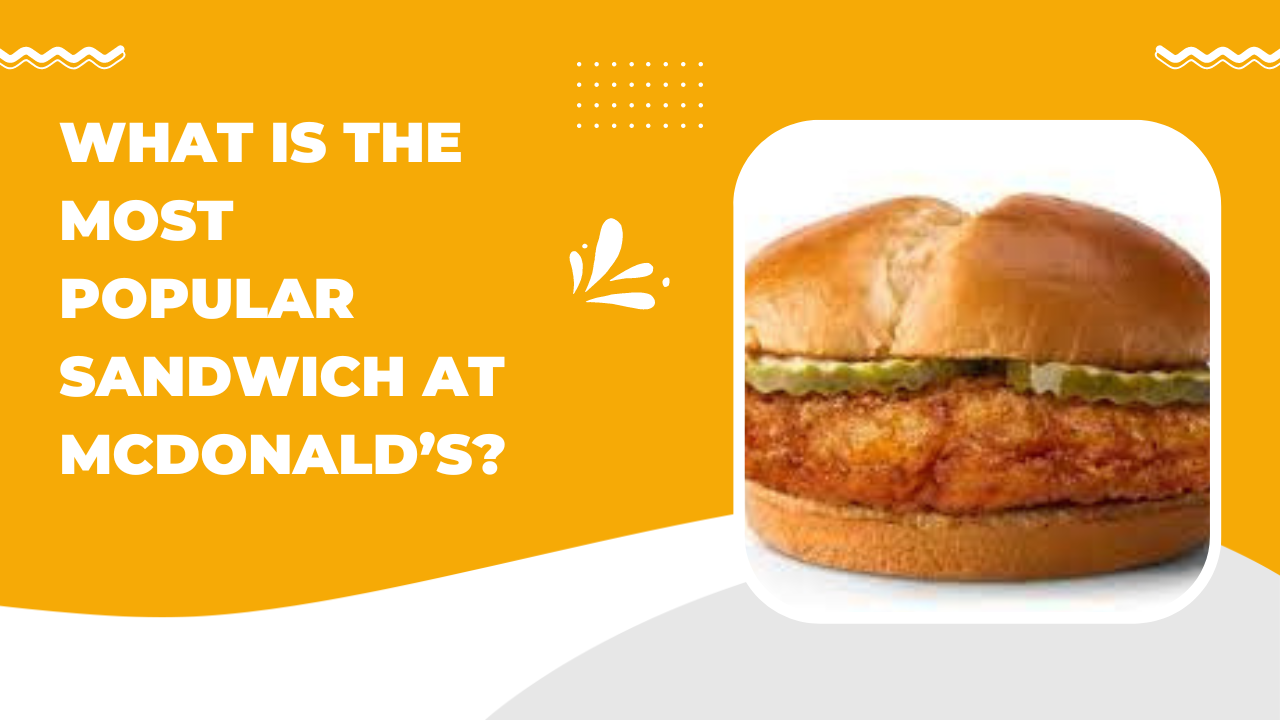 McDonald’s is a hub of sandwiches, a fact that makes more sense when you understand that all burgers are sandwiches, but not all sandwiches are burgers. When it comes to burgers, McDonald’s is one of the leading producers, and it’s only fair to ask about their flagship food item.

Now, there are many contenders for this position, from the prestigious Big Mac to the insanely delicious McChicken. Not only is it difficult to pick a single most popular sandwich without accessing official data from the restaurant, but I also want to cover as many people’s interests as possible.

After mentioning the single most popular sandwich at McDonald’s, I’ll list some of the most popular food items you can get at the restaurant. I’ll also show you some recommendations for some things to get at the fast food chain using metrics other than popularity.

What’s the Most Sold Item at McDonald’s?

The most sold item at McDonald’s is the French Fries. It doesn’t matter what you’ve heard or seen around about them, people take fries with most of their orders. Not only do they want fries, but they also want them so much that it has become the bestselling item at the restaurant.

When you think long and hard, you’ll notice that French fries being the number one item isn’t all that surprising. They’ve always been around, they’re served all day, and they’re as addictive as crack; you’ll always find yourself going back for some more.

What is the Most Expensive Thing on McDonald’s Menu?

I’m not sure if some of you are swimming in money, but you seem to ask Google about the most expensive thing on the McDonald’s menu a bit too often. If you’re trying to show off to your crush or just want to see how expensive McDonald’s can get, I got you.

The most expensive item you can find on a McDonald’s menu anywhere is of course a sandwich, specifically the Grand Chicken Special, which costs $27.19. This figure doesn’t seem like a lot, but it doesn’t sound like something I’m willing to pay just to get a quick lunch.

To get the menu item for that price, you’ll need to have to head over to Lebanon, which is the only country where it’s sold at that price. The inflation in Lebanon has grown so high that food prices are absurd; I mean, you pay $21.89 to get a Big Mac in this country.

So, there you have it. If you’re feeling a bit too rich, you should try heading over to Lebanon to try the Grand Chicken Special. It’s not the most popular item on the menu nor is it the most delicious, but one thing you can be sure about is that it’s crazy expensive.

What is the Most Popular Sandwich at McDonald’s?

Believe it or not, the most popular sandwich at McDonald’s right now is the Big Mac. It’s also the second most popular food item on the menu, second only to the iconic French fries, of course. You can get it in two sizes: the Grand Big Mac and the Mac Jr., which makes the Big Mac sound cooler than it is.

While many McDonald’s customers have their reservations about the burger, it remains the most popular sandwich on the menu. If it has kept its title for so long, it’s probably because McDonald’s has done almost everything right with the food, leaving little room for complaints.

McDonald’s has a whole lot of sandwiches, and compared to other fast food restaurants in the country, they’re all pretty popular. However, some of these items just rank higher on the popularity charts than others. Here is a list of McDonald’s most popular sandwiches.

Egg McMuffin is the only breakfast sandwich on this list, and it deserves it. If I could choose any breakfast item to be available all day, it would be this, for how delicious it simply is. The Egg McMuffin consists of eggs, bacon, cheese, and butter on an English muffin.

The Double Cheeseburger uses two beef patties instead of one, enclosed in regular buns. If you think it’s the same as the McDouble, wait until you see the extra slice of cheese, which is the primary difference between the two items.

What is the Best Food from McDonald’s?

How Much Is a Big Mac in California?

Does McDonalds Serve Fries in the Morning?

What is The Cheapest McDonalds Meal?

When it comes to purchasing food at a fast food restaurant, you can be sure you can’t go wrong with one of the most popular offerings. What’s a better way to grab a quick meal at someplace like McDonald’s than checking out their most popular food item?

This article has compiled the most popular foods you can get at McDonald’s; all you have to do is read and make your orders.