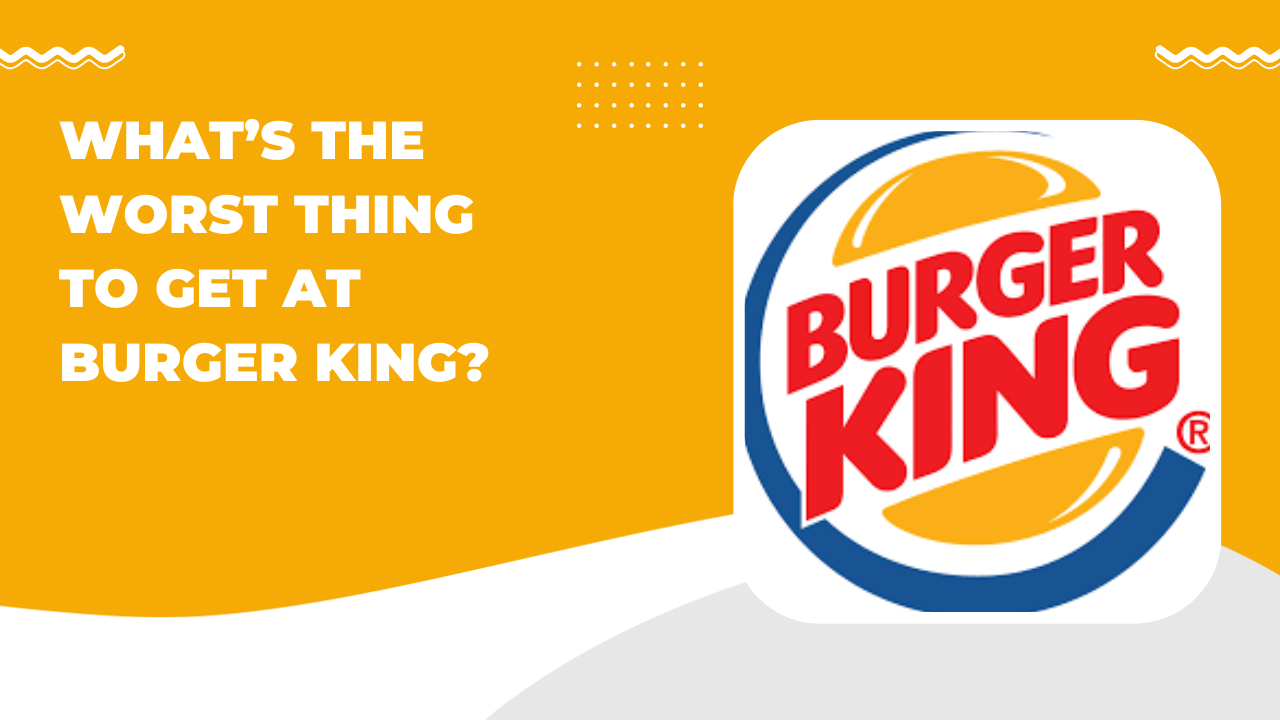 There’s an abundance of items on the Burger King menu, and unless you’re a regular at the restaurant, you’ll have to spend some time deciding on what to order. One way to go about ordering something good is to go for one of the most popular items.

Sometimes, however, you have the time and you’re looking to try something new. In those cases, you’re not really after a quick and fulfilling meal, but you don’t want to order something atrocious either, which leads to you picking an interest in finding out what the worst items at Burger King are.

There are several ways to determine good or bad, especially with an establishment as large as Burger King. You can use popularity, which is an objective measure of how much people dislike the food items; healthiness, which is another objective metric; or people’s feedback across this web.

This article will explore the worst things to get at Burger King using this metrics.

Talking about food items as “unhealthy” isn’t exactly accurate, regardless of how little nutritional value they offer. Unless the food is poisoned, every food item sold at restaurants is healthy. However, there’s also an argument to be made for the health benefits of many food items out there.

You can eat any item on the Burger King menu as long as you’re willing to balance it with more nutritional items. If you’re not the type to be counting your calories and watching what you eat, there are certain food items that you want to actively avoid when you eat at Burger King.

Most nutritionists rank unhealthy foods by comparing the number of calories it has to the nutritional value you get by eating them. Going by that, many of the burgers on the Burger King menu are “unhealthy,” but some are the unhealthiest of them all.

The unhealthiest burger at Burger King is the Texas Double Whopper, which has 1878 calories in total; that is only 122 calories shy of the recommended daily calorie intake for women. If that sounds absurd to you, wait until you learn that it’s only for the burger, fries, and soda will also add to the calorie count.

The sodium in the burger is nearly 800 mg over the daily recommended limit, and you get 136.3 grams of fat from it alone. If you’re watching you’re your weight, this is not the best burger to try at Burger King.

How Unhealthy is a Whopper?

Contrary to what random nutritional blogs might have you believe, the Whopper isn’t an unhealthy food item. Something unhealthy will offer more harm than good; examples are alcohol and tobacco. However, it would be a huge stretch to claim a Whopper is unhealthy, but it’s not the healthiest food out there either.

The Whopper has over 600 calories without including fries or soda. When you add the extra calories, you’ll arrive at a huge number based on a 2,000-calorie diet. The nutritional disaster doesn’t end there; one Whopper contains around 40% of the recommended daily value for sodium.

Without the cheese, the Whopper comes out at around 60% of the recommended daily intake for both fat and proteins. When you have one per day, you don’t need much to hit the limits for what you can consume per day, helping you add unhelpful weight.

While consuming too many of these burgers could make you fat, there are even worse things to worry about. The sodium content puts you at a higher risk of heart disease and high blood pressure. While you can safely eat Whoppers, not watching your consumption could spell issues in the future.

It might be helpful to learn about the best food item to get at Burger King, but it’s arguably more helpful to find out the most popular item. If you’re trying to place an order in a hurry, you can simply find out what people love the most at the restaurant, place an order for it, and enjoy.

Of course, next to the French fries is the Whopper, Burger King’s flagship burger. If you’re after the most popular “normal” food item, the Whopper is exactly what you seek. The Strawberry Banana Smoothie completes the top three most ordered food items on the Burger King menu.

What’s the Worst Thing to Get at Burger King?

I’m not sure about what you regard as the “worst” thing. While most people will agree that the least appealing food item deserves to be tagged the worst, others will prefer to rank food items based on their nutritional value, and neither is wrong.

Talking about nutritional value, the Triple Whopper with Cheese should come top as the worst item you can get at Burger King. The gigantic burger contains 1,220 calories, which is way above half the recommended daily intake, going by a 2,000-calorie diet.

The 1,470 mg of sodium is also excessive, given that you shouldn’t consume over 2,300 mg per day. While it’s not the worst burger, you can get in the United States, it’s the worst you can get at Burger King and you should stay away if you’re concerned about your health.

Talking about the general appeal of the items, however, the crispy chicken garden salad, onion rings, and the Single Sourdough King are all deserving of the worst Burger King item crown.

Does Burger King have a $5 Whopper Meal?

What is The Healthiest Thing on a Burger King Menu?

Do Burger King Do Burgers in the Morning?

Does Burger King have a $5 meal deal?

Does Burger King Serve Everything in the Morning?

Given that Burger King generally serves delicious foods, it doesn’t seem natural to write about the “worst” food you can get there, but it’s necessary. Spoiler alert: always stay away from Triple Whopper with Cheese whenever you find yourself around BK.