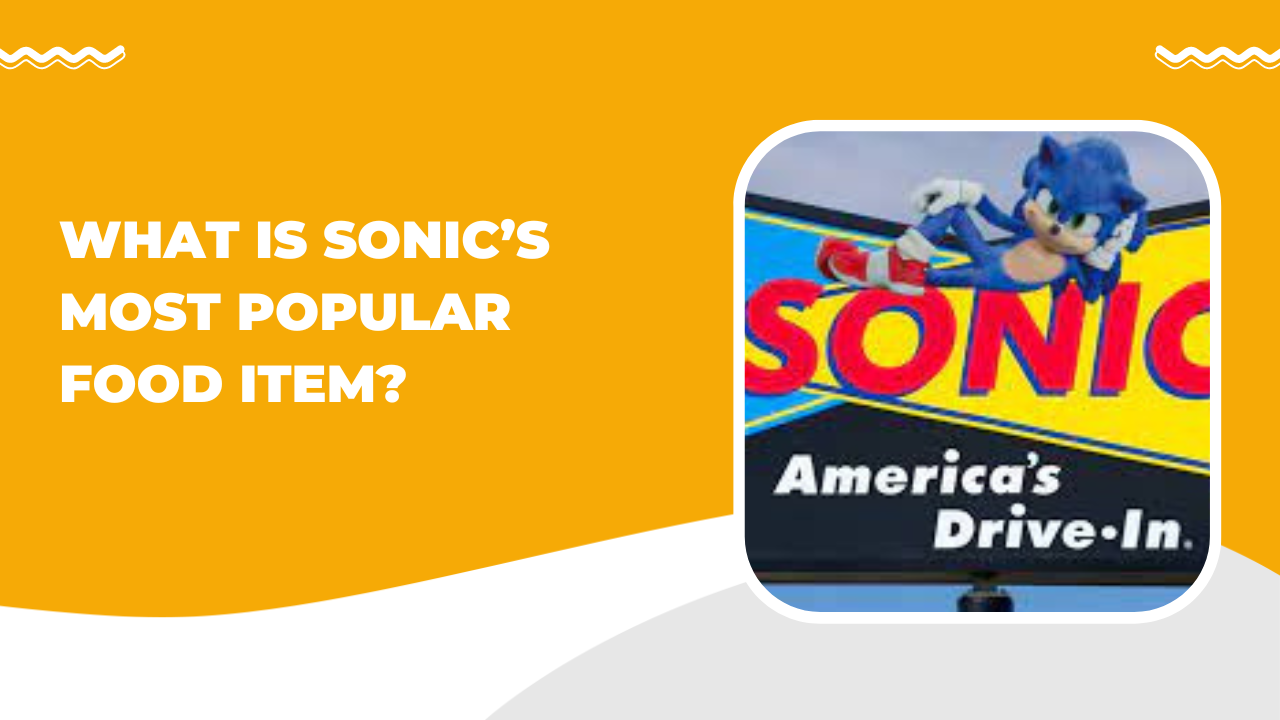 Sonic has grown tremendously popular over the past few decades, especially for a fast food business that operates mainly through drive-ins. While the business itself is popular as a whole, one should also be aware that individual food items on the menu do not have the same popularity; some simply sell better than others.

For managers and franchisees of Sonic outlets, the sales figure is a valuable metric to help them discover what food items they should focus on stocking. For you, it’s an opportunity to filter junk from regular foods to cut down the time you spend looking through a menu.

What Food is Sonic Known For?

Frankly, Sonic is known for more than a single food item, depending on who you ask. Different parts of the country appreciate different parts of the Sonic menu, so you should expect everyone’s mileage to vary. However, there are some Sonic classics that pretty much all customers should be able to relate to almost instantly.

For instance, you can’t seriously be a fan of the restaurant without knowing about the Sonic Cheeseburger Combo. The Chili Cheese Coney and Wacky Pack Kid Meals are other parts of the Sonic menu that most people can install relate to, at least, if they’ve once eaten or worked at Sonic. The hamburgers also create a direct connection to Sonic, especially when mentioned in some parts of the country.

Apart from the food, Sonic is known for a few other things. One is the drive-in system, a pretty unique way to run a fast food outlet in the United States. Another is the delivery system, as the restaurant uses skilled carhops to deliver customers’ orders to their cars.

What is Sonic’s Secret Menu?

Like some other restaurants in the United States, Sonic does keep a secret menu that’s not so secret. There are a couple of surprise items on the secret menu, and no joke, some of them are so good that you’ll order again. Accessing the secret menu is easier than you think: simply ask for it.

If you’re curious as to what’s on the secret menu, I can let you in on the secret. There are relatively normal items like the Grilled Ham and Cheese, Frito Pie, Sonic Sunrise, and the Sunshine Smoother, but there are also some crazy-sounding ones like the Dr. Pepper Orgasm.

Before you go on to correct me, the Dr. Pepper Orgasm part wasn’t a typo, it’s the real name of a drink made from lemonade, Powerade, and Dr. Pepper. I have no idea why it was named that, but you should have expected surprises like that when you decided to ask for the restaurant’s secret menu.

What is Sonic’s Most Popular Drink?

Sonic serves a lot of drinks, most of which are both good and popular. However, there can only be one most popular drink, and that crown rightfully goes to the Cherry Limeade. It’s one of the older options on the drinks menu, amassing enough popularity to make it here over the years.

When talking about the health benefits, however, I can’t say much about the limeade. For one, I’m sure it adds a massive amount of calories to what you’ve already consumed. If you’re eating one of the heavier items on the Sonic menu, adding the Cherry Limeade wouldn’t be the most healthful choice.

Anyway, who goes to a restaurant to worry about the number of calories in their drink? As long as you’re watching what you’re eating, you should be able to consume this drink at Sonic without compromising your well-being.

What is Sonic’s Most Popular Food Item?

There aren’t credible sources around the internet ranking Sonic’s food items by their sales volumes. However, going by popular assumptions about the restaurant, it’s possible to make informed guesses as to what the most popular food items are.

With that said, here are the items likely to be the most popular foods Sonic serves.

While I’ve listed this limeade as the most popular drink earlier, it also happens to be the most popular order when you’re not specifically after one of the main food items. You already know a lot about it, and if you don’t, the preceding section will help you out with that.

While most of the items on the Sonic menu are snacks, there are a couple of regular foods, and the cheeseburger happens to be the most popular of all. To come clean, almost every burger on the Sonic menu is a cheeseburger, so, their cumulative sales figures should be enough to earn them a place here. Plus, they’re just so good, try one.

Mozarella Sticks sit atop the snacks and sides menu, and deservedly so. Sonic makes the sticks with real melty mozzarella cheese that’s fried and served with marinara sauce. You can choose any other sauce as you see fit, and the entire item has 590 calories, which is a bit on the high side for something listed as a snack.

Sonic Route 44: All you need to know

How To Find Sonic Restaurant Near Me

Sonic has a lot of popular items, but what is the most popular? At the moment, it seems like we’ll never know for sure, as the restaurant doesn’t release official rankings of their products by popularity. However, going by what I could gather, the crown should go to the Cherry Limeade.