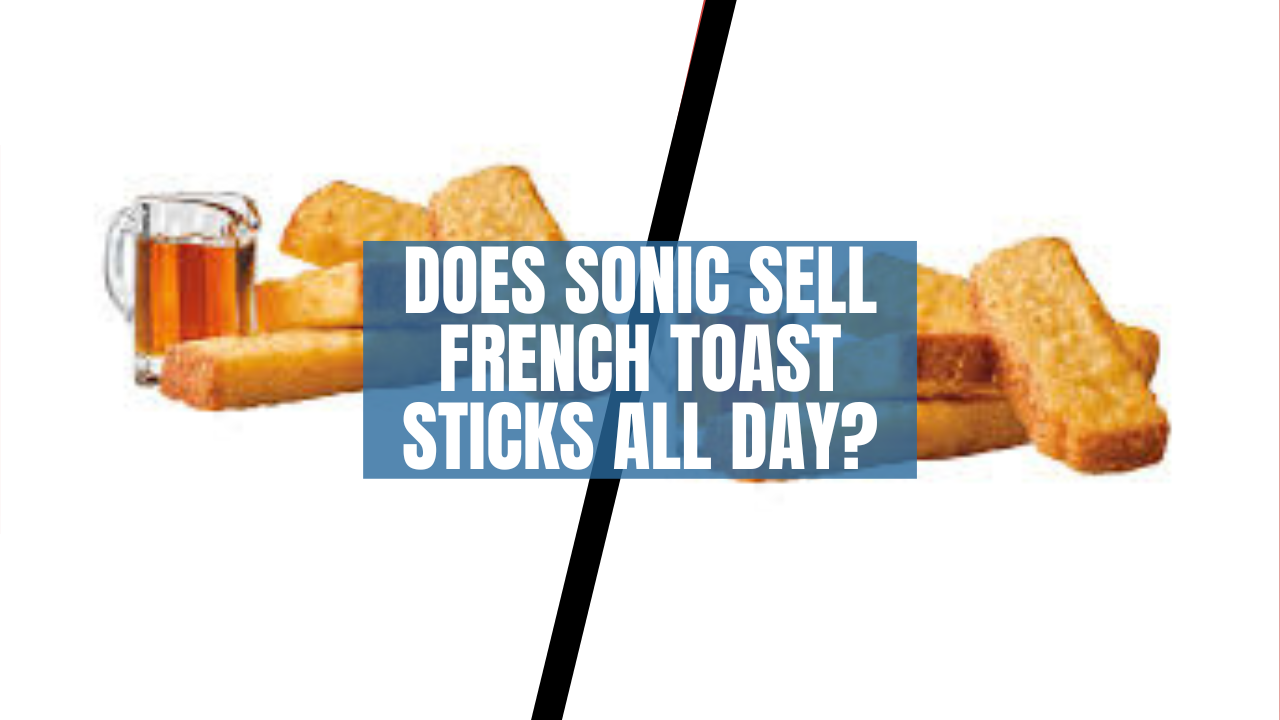 The French toast sticks from Sonic are one of the most sought-after items from the menu, even if pretty much every restaurant out there now offers it as part of their menu. Since those you get from Sonic are delicious and easily accessible for people living near an outlet, you may want to find out when you can get some.

In this article, you’ll learn if Sonic sells French toast sticks all day. Also, you’ll get answers to some of the questions you might have about the restaurant’s breakfast menu, including how many toast sticks they give you and if you can get the Cinnasnacks all day.

How Many French Toast Sticks Does Sonic Give You?

One of the most common questions that Sonic customers ask before ordering from the fast food chain is how many French toast sticks they get, believe it or not. Since you likely also have the question, here is what you’ll find in the package when you order the iconic French toast sticks from Sonic.

According to the restaurant’s official website, ordering the French toast sticks gives you four thick sticks that are always served warm with maple syrup. The entire package should only supply a total of 570 calories unless you’re adding one of the extras that shoot up the calorie count.

Sonic does sell French toast sticks, as well as every other item on the breakfast menu all day long. It’s not like they have many options; when you subtract the breakfast items from the menu, you aren’t left with a lot of reasonable foods.

From that, it’s clear that French toast sticks are not the only Sonic item that’s available all day. Every other breakfast menu item, including the Cinnasnacks, are also available at all times of the day, not to mention that you can also get the regular lunch menu in the afternoon. In short, you can get any item on the Sonic menu at any time of the day!

Does Sonic Serve Mozzarella in the Morning?

One crucial thing you should know about Sonic is that the entirety of the restaurant’s menu is available throughout the day. In short, there are no specified breakfast, lunch, or dinner hours; you can walk in and order whatever you want at any time of the day.

Back to the mozzarella question, you can order mozzarella sticks at Sonic any time of the day, just as you can with every other food item they serve. The only question you should be asking now is if the Sonic Drive-in you’re patronizing does offer mozzarella on its menu.

The Sonic Cinnabon Cinnasnacks are available all day at Sonic, and that’s not even a special thing. The reason for that is simple: as I’ve explained above, every item on the Sonic menu is available throughout the day, and as long as Cinnasnacks is on the menu, it’s available.

When Does Sonic Stop Serving Breakfast?

Items like French toast sticks and breakfast sandwiches are what makes life worthwhile, and guess what: Sonic only sells those as part of the breakfast menu. If you’re looking to get a bite of one of the restaurant’s breakfast delicacies on time, you may want to know when they stop serving breakfast.

There are two interesting facts about Sonic’s breakfast hours: the first is that they serve breakfast all day, and the second is that they’re open 24/7. In short, Sonic doesn’t stop serving breakfast; they’re always there to serve you anytime you need an item from the breakfast menu.

One thing you should know, however, is that the restaurant may be closed on some holidays. Virtually no US restaurant opens on Christmas and Thanksgiving, and if you must eat French toast sticks on those days, I’m afraid you’ll have to make it yourself.

Does Sonic Serve Breakfast All Day?

Unlike most other restaurants in the United States, Sonic’s main strength is in its breakfast menu, which makes up the bulk of its offerings. From the insanely famous French toast sticks to the Cinnasnacks, you only get to access that from the breakfast menu, but does Sonic serve breakfast all day?

With almost all preceding sections asserting that you can access most of the breakfast items, including the Cinnasnacks and the French toast sticks all day, you don’t need a soothsayer to tell that the restaurant serves from its breakfast menu all day.

Also, you should understand that the operating hours at Sonic may differ across the different locations available in the United States. While some open as early as 6 am, others don’t come around until an hour or two later. Also, the closing time could be anywhere from 5 pm to 11 pm, depending on the day of the week and the specific outlet.

How To Find Sonic Restaurant Near Me