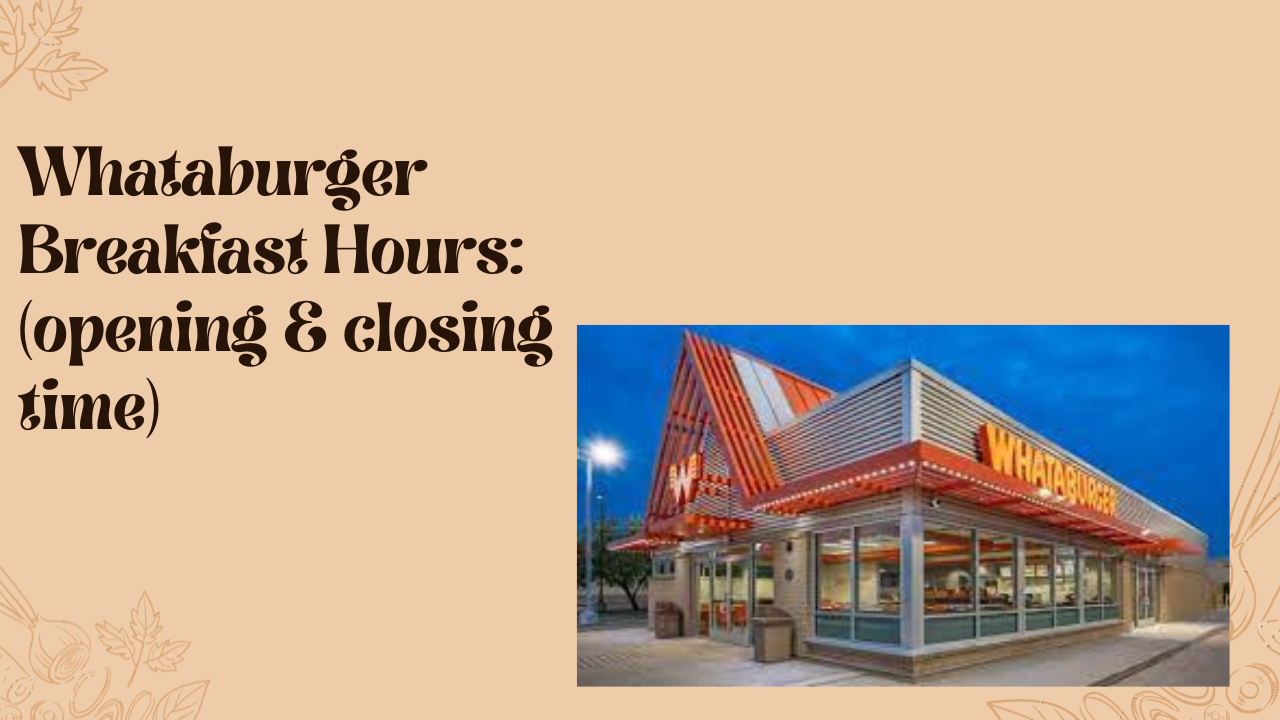 In this article, you’ll learn about the Whataburger breakfast hours and when they stop serving breakfast. Also, I’ll outline some items on Whataburger’s menu to help you evaluate your breakfast options.

If you eat breakfast at really odd hours, you might’ve noticed that you frequently find Whataburger not offering the breakfast menu. This can be quite surprising, given that you’ve heard that this restaurant serves breakfast all day, as long as it’s open.

Interestingly, Whataburger is one of the few spots that serve breakfast for half a day. If you’re looking to start your day at Whataburger, you may want to learn about its breakfast hours.

When Does Whataburger Start Serving Breakfast?

Whataburger usually starts serving breakfast from 11:00 pm of the previous day, and it serves until 11:00 am. While these hours have seen slight fluctuations in recent years, it has always returned to the 11 to 11 routine, which has historically worked for the restaurant.

Whataburger is popular for its all-day lunch, but that isn’t the same case as for breakfasts. However, the breakfast hours at the restaurant are so flexible that they’re only matchable by a few options.

At the moment, you can always get a hearty Whataburger breakfast, as long as you can get to a supported outlet after 11:00 pm of the previous night. When you compare this to competing restaurants, even those that open for 24 hours every day, Whataburger’s offering just wins totally.

Comparing it to an option like McDonald’s, for example. Many McDonald’s restaurants open 24/7, but they only start serving breakfast by 5 am. If you get there by midnight, you’ll have to eat from the dinner menu, which doesn’t make much sense, since everything, after midnight, is morning.

It’s good that there are options like Whataburger standing against that. Since it’s almost impossible to be too early for Whataburger breakfast, it’s important to analyze when they stop serving to check if it stacks up well against the competition too.

Just because Whataburger starts serving breakfast a bit too early compared to most of its competition, the time it stops serving comes as a bit of a surprise, since you’ll naturally expect it to do better. However, this doesn’t mean it’s bad; in fact, it’s better than most of the competition.

You can always get breakfast at Whataburger, as long as you don’t show up after 11:00 am. While the restaurant starts serving breakfast from 11:00 pm, which is insane, it stops by 11:00 am, which is the industry standard in the United States.

If the claims of the 12-hour breakfast made you think you can walk in after 11:00 am to pick up breakfast, you’d be wrong. You should always get there soon enough to pick up your breakfast before it’s too late.

As a side note, most Whataburger has shown to be somewhat consistent with its weird breakfast hours over the years. If you’re too many minutes later than the time Whataburger stops serving, you should probably look for other alternatives that also serve breakfast around.

While the crazy rumors you’ve been hearing about breakfast at Whataburger are mostly true, it doesn’t mean you can have an all-day breakfast at the restaurant. Even at that, Whataburger deserves accolades for being one of the most flexible destinations for breakfast in the country.

If you’re wondering if you can also get breakfast at midnight, yes, you can. Whataburger serves breakfast from 11:00 pm of the day to 11:00 am of the next day, making it 12 full hours of breakfast every day, including weekdays and weekends.

Needless to say, this feat is massive, and it makes the restaurant one of the best for breakfast in the country. If you’ve not tried out items from the breakfast menu, however, you still have a lot to learn about breakfasts at Whataburger.

What time does Whataburger close?

You can get Whataburger at any time of day.

That’s right, you can order your favorite burger from Whataburger anytime, anywhere. It’s available 24 hours a day and across the country, so whether it’s your lunch break or dinner that calls for a taste of Whataburger (or any other item on the menu), you’ll be able to find one nearby.

How to Get a Whataburger Restaurant Near Me

You can only realistically eat breakfast out at Whataburger if you have one close enough to you when you thought about it. With its 824 locations across the United States, you should always be close to one.

If you can drive to an outlet in time to get breakfast, you’re in for one of the best breakfasts you’ve ever had in a long time.

Whataburger might be cleverly named, but the fact that it serves breakfast for 12 hours every day is proof that the cleverness doesn’t end in the name. Technically, you can get up in the middle of the night and decide to get breakfast at a Whataburger restaurant.

However, it’s a surprise to learn that the restaurant also stops serving at around the same time as everyone else. While that isn’t bad in any way, opening seven hours earlier just makes people expect more of you.

Does Whataburger make burgers in the morning?

We know Whataburger for its burgers, which are made with 100% beef and are served on a toasted bun.

How many calories in a Whataburger breakfast burger?