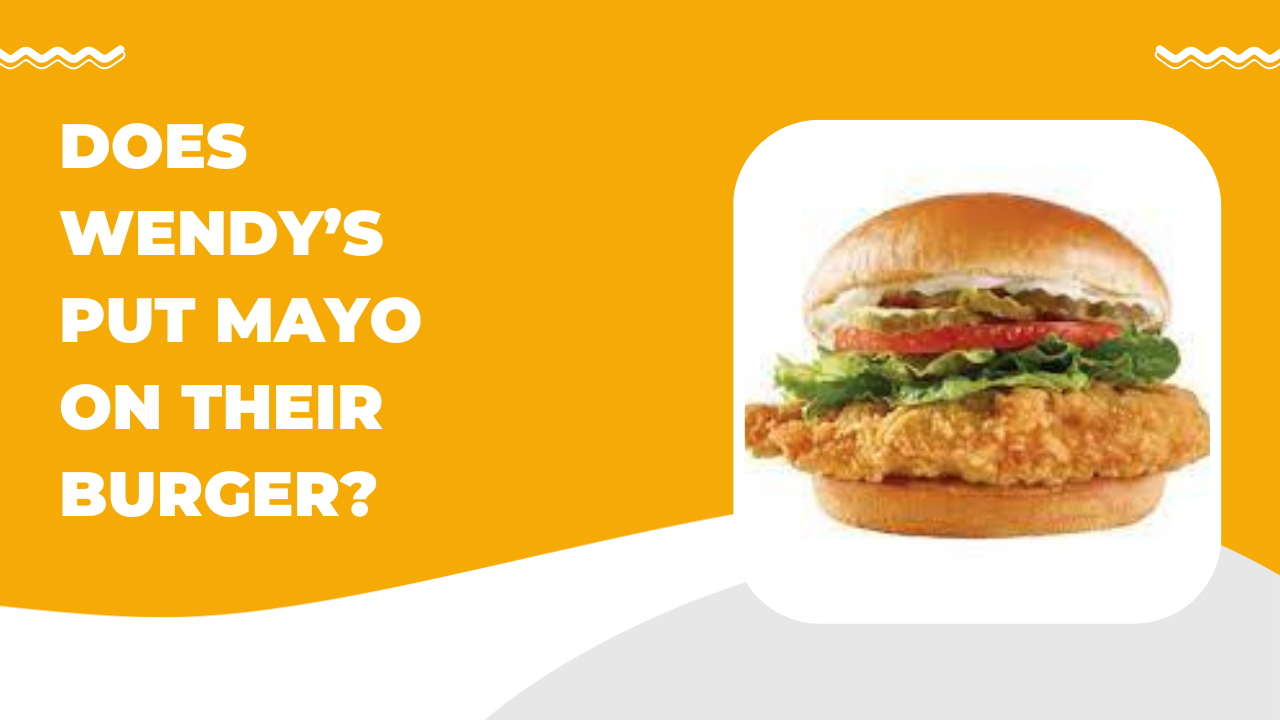 Wendy’s makes some of the most delicious burgers in the United States, and to achieve such a feat, they just have to use some crucial ingredients. While people generally don’t have issues with whatever the restaurant decided to put on burgers, there are always exceptions.

If you’ve noticed that you don’t react well to mayonnaise, you may want to stay away from restaurants that use it as one of the sauces on their burgers. In this specific article, I’m shining the torch on Wendy’s, a restaurant known for putting all sorts of things on their burgers.

Does Wendy’s put mayo on their burger? What kind of sauce should you expect on a burger from Wendy’s? These and more are the questions I’ll be answering in this article, in addition to giving you a breakdown of the ingredients you can expect to find in Wendy’s hamburgers.

What Sauce Does Wendy’s Use on their Burgers?

Wendy’s has tons of sauces for different food items, but not all of them can (should) go on a salad. I’m sure they’ll be willing to offer you any of the sauces available if you can break enough windows. However, this section only promises to show you the sauces you can use on your burgers, and that’s exactly all you’ll get.

There are a couple of sauces available for sandwiches and burgers, some of which include mayo, ketchup, hot honey sauce, honey mustard, S’Awesome sauce, BBQ sauce, and ranch sauce, amongst others.

By default, most Wendy’s burgers only come with mayo and ketchup, but you can always ask for something else. You should also know that the S’Awesome sauce is simply a mixture of mayo, ketchup, and some other ingredients, the same as most of the other sauces available.

Does Wendy’s Put Mayo on their Burger?

First off, you should know that mayo is short for mayonnaise. It’s a common dressing for salad, hamburgers, sandwiches, and some other food items. While it typically makes your food better, there are reasons why you may not want it on your burger.

Wendy’s does put mayo on most of their burgers by default unless you specifically ask them not to while ordering. Mayo, along with ketchup, is some of the few condiments that characterize Wendy’s burgers, giving them the unique taste associated with food items from the restaurant.

You can always order your burgers without mayo if you want to. Simply state it while making your order and you shouldn’t have to deal with any mayonnaise when the food arrives. A pro tip for eating at Wendy’s is that nearly everything is customizable; you can add or remove whatever you want from the ingredients and still have it made for you.

Is It Normal to Put Mayo on a Burger?

Mayonnaise is one of the most normal things that you can put on a burger; that’s how normal it is. When you go to the Wikipedia page for mayo, the definition specifically lists hamburgers and sandwiches, proving that it’s a common dressing for burgers.

However, you don’t have to like or even tolerate mayo since it doesn’t work for everyone. If you’re a vegan, for instance, you shouldn’t consume regular mayonnaise, as chicken eggs are part of the ingredients. While there’s vegan mayo out there, I doubt if restaurants like Wendy’s keep it around, so, it’s just better to stay off.

Then, there’s the sea of other vague long-term consequences of eating too much mayo, like an increased likelihood of developing heart disease and whatnot. You generally shouldn’t worry about that, or you’ll end up not eating anything because they all increase your rid of developing something scary.

Does Wendy’s Put Mustard on their Burgers?

To understand Wendy’s mustard story, we need to revisit the original Wendy’s menu. The hamburger included less bacon, less beef, and mustard. Thankfully, that’s no longer around, but it’s crucial to understand how mustard might have made it into Wendy’s story.

By 2011, Wendy’s revamped its menu, removing mustard from the condiments used for topping mustard by default. Instead, restaurants in its chain use mayo and ketchup, among other ingredients. While those do not give you the iconic Wendy’s taste, they’re so much better.

You should also note that you can always get mustard on your burgers at Wendy’s if you wish. The restaurant always keeps some of the condiments around for people that enjoy smashing restaurant windows; better to simply add mustard to a burger than repair a broken window, don’t you think?

Does Wendy’s Have a Secret Sauce?

Most restaurants tend to have a designated secret sauce, but if they were ever really secret, nobody would’ve known about them. Does Wendy’s have a secret sauce? Not exactly, as the website lists them as “not-so-secret sauces”, and I tend to agree with them.

The items on the not-so-secret sauce list include the Smoky Honey Mustard, which is exactly what it sounds like. Another item on the list is the Ranch Sauce, which for me is too popular to even be listed as “not-so-secret.” The sauce is made from buttermilk and a couple of other herbs and spices and is sure good.

Completing the list of Wendy’s not-so-secret sauces is the Cheddar Cheese Sauce. Made from whole milk and cheddar cheese, this special sauce is all you need to reinvent a burger. If you’ll take those as secret sauces, then yes, Wendy’s does have some delicious secret sauces.

How to Reheat Wendy’s Baked Potato

How to Reheat Wendy’s Fries

If you’re wondering if Wendy’s ever puts mayo on their burger, yes, they do, and it’s even one of the sauces they use by default. You need to indicate while placing your order if you will not be having the sauce, otherwise, enjoy your hamburger with mayonnaise sauce.