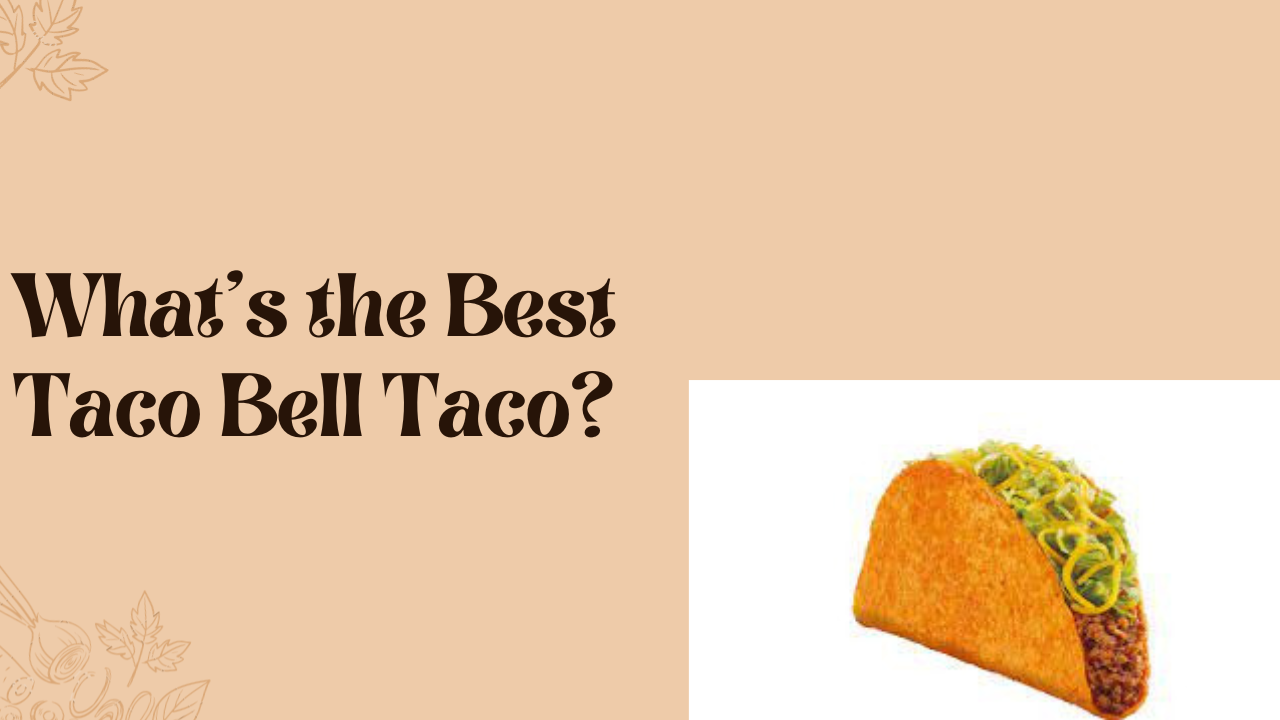 The most popular items on the Taco Bell menu are all tacos, and that shouldn’t come as a surprise, as it’s literally in the restaurant’s name. It wouldn’t even be a surprise if all the items on its menu were tacos, as long as there are drinks to go with them.

In this article, I’ll list some of the best tacos from Taco Bell and explain why they’re so good. Also, you’ll get an answer to some of your most pressing questions about the restaurant to help you learn more about how it works.

Taco Bell is famous for its insanely good tacos. Here are some of the best Taco Bell tacos you shouldn’t miss when dining at the restaurant.

When it comes to tacos, nothing compares to the Crunchwrap Supreme in the United States; even outside Taco Bell specifically. On the outside is a warm flour tortilla that could theoretically house whatever you want from the menu at Taco Bell, apart from other tacos of course.

You can have a reasonable expectation of awesomeness from any Taco Bell taco with the word “supreme” in its name. While the Crunchwrap Supreme takes the crown for the overall best, the Crunchy Taco Supreme is another taco that keeps people coming back to the restaurant.

When ordering the Crunchy Taco Supreme, you can choose between beef and chicken grill, and Taco Bell will dutifully take care of the rest for you. If you’re counting calories, you can also order “Fresco style” to keep the calories low without severely impacting the taste.

Some will argue that Chalupas aren’t tacos, but a compilation of the best tacos at Taco Bell just doesn’t feel very complete without the addition of one of these delicious guys. Talking about adding a chalupa, what’s a better contestant than the supreme representative: the Chalupa Supreme itself?

According to the description from Taco Bell, the item is crispy and flaky on the outside, but chewy on the inside. To me, it sounds like it strikes an agreeable balance between soft and crunchy tacos, appealing to everyone on either side of the tacos cult. It contains the regular Taco Bell filling: seasoned beef, tomatoes, cheese, and lettuce. It’s unarguably the best chalupa, and probably one of the best tacos on the menu.

The Nacho Cheese Doritos Locos Taco only appeared on the Taco Bell menu recently, but it has started gaining so much popularity that it can make it to a list of the best tacos from Taco Bell. Most of this item’s awesomeness comes from the taste, but it also happens to be a pretty healthy taco.

The taco has a hard and crunchy shell that encloses seasoned beef, cheese, and lettuce. At $2.39 per taco, the package sounds like a very fair deal, not to mention that it only contains around 170 calories. The Doritos Locos Taco is no doubt one of the best tacos on the Taco Bell menu.

There’s nothing overwhelmingly special about the Crunchy Taco, apart from the fact that it’s crunchy. While the crunchiness is a quality that some diners love, it’s not enough to earn you a place among the elite class of tacos at the restaurant.

Within the warm flour tortilla is a generous helping of seasoned beef, assisted with lettuce and cheese. It’s the same thing you’ll find on any basic taco at the restaurant, making it sound duller than it is. At $1.69, however, there are very limited grounds for complaint.

You’ve seen a couple of “Supreme” options earlier, and this pretty much follows the same template. It’s an upgraded version of a regular taco, designed to make its other version look so bad that you’ll start wondering why they even introduced it to the menu. If you’re ever going to try any of the restaurant’s soft tacos, you want to ensure it’s the Soft Taco Supreme.

The item contains seasoned beef, lettuce, cheese, tomatoes, and fat sour cream, all wrapped in a soft flour tortilla. A fact you should know is that you can either like this item or hate it. If you’re part of the crunchy tacos cult, you may be doing yourself a favor by staying away from soft tacos.

Your experience with the Soft Taco is mostly based on how lucky you are. For some people, it’s the best item on the menu, having just the right amount of substance within to make it worth another try. On the other hand, some have it so bad they never want to try it again. With that, it’s pretty difficult to rank it too highly.

It consists of a raw tortilla that houses lettuce, cheese, and seasoned beef. Offering only 180 calories, the taco is light on protein, which isn’t surprising, given its size. It doesn’t matter if you’re counting calories, the soft taco is a game changer.

What Is The Best Crunchy Taco In Taco Bell?

There is no one “best” crunchy taco at Taco Bell, but some of our favorites include the Fiery Doritos Locos Tacos, the Crispy Chicken Tacos, and the Cheesy Gordita Crunch Taco. These tacos come with crispy shells and tons of delicious toppings, so they’re sure to satisfy any taco cravings.

How Many Calories In A Taco Bell Taco?

There isn’t a definitive answer to this question because it varies depending on the specific taco bell taco. However, one example of a taco bell taco that contains 158 calories is the chicken soft taco.

If you’re looking for a delicious, hearty salad that’s perfect for a summer day, you need to try Taco Bell’s taco salad. This salad is packed with protein and vegetables, and it’s perfect for a light lunch or dinner.

The salad is made up of crispy beef tacos, crisp lettuce, diced tomatoes, diced red onions, and creamy cheese sauce. It’s then topped with a delicious avocado ranch dressing, and it’s ready to eat.

This salad is a great way to combine all of your favorite flavors, and it’s perfect for a summer day.

Taco Bell does serve some very delicious food items, but the highlight of its menu has to be the tacos; they’re named after it, and we can all agree they make some of the best tacos around. If you have no idea what to get at a Taco Bell, this list of the best Taco Bell tacos is a huge tip.