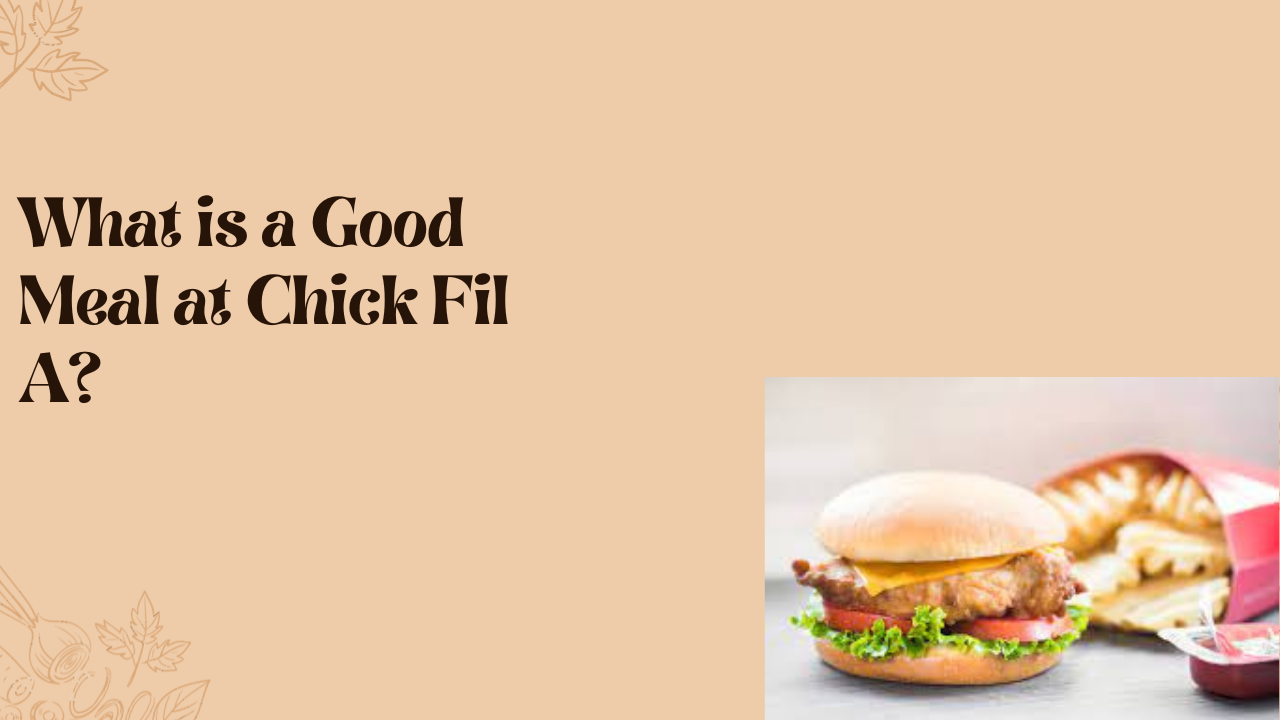 Chick-fil-A is a great place to enjoy a good meal. From the delicious chicken sandwiches to the hash browns, there is an abundance of delicious and healthy food items on the Chick-fil-A menu. Because of that, you may wonder: why do people ask about good meals at Chick-fil-A?

Don’t get me wrong; I’m not saying everything at Chick-fil-A is excellent, but there are so many good meals at the restaurant that it’s probably more correct to ask: what’s not a good meal at Chick-fil-A? However, the goal here is to answer your questions, and that’s exactly what I’m doing.

In this article, you’ll learn about some of the best meals to get at Chick-fil-A. From popularity rankings to health rankings, you’ll get different answers to the question from different perspectives. Without further ado, let’s jump in.

What is a Good Meal at Chick Fil A?

As explained earlier, there is no shortage of good items on the Chick-fil-A menu. From crispy chicken sandwiches to delicious drinks, the restaurant is the real home of good food. On the negative side, however, not every item on the Chick-fil-A is good.

To help separate the good food from the not-so-good ones, I’ll list some excellent Chick-fil-A meals in this section. Without wasting unnecessary time, here are some good meals you can have at any Chick-fil-A restaurant near you.

The Chick-fil-A Chicken Sandwich is probably the most iconic item on the restaurant’s menu, and as you’d expect, it does taste phenomenal. It’s the third (or fourth) best-selling item on the Chick-fil-A menu, depending on which part of America you reside.

The sandwich is a simple boneless chicken breast served on a toasted bun with dill pickle chips. You can also have it on a multigrain bun on request, and the entire meal has only 440 calories. The Chick-fil-A Chicken Sandwich is no doubt one of the best meals you can order from the restaurant.

You don’t get a food item more versatile than Chick-fil-A Nuggets, and the versatility is why they consistently rank so high on popularity lists. Not only is it one of the most popular items, but it’s also good, both as a main course meal and as a side.

The nuggets are from little pieces of seasoned chicken breast that are pressure cooked in peanut oil. You can get your choice of dipping sauce to spice up the meal. With the standard eight pieces of nuggets providing only 240 calories, it’s no doubt one of the better meals at Chick-fil-A.

The food item is made from potato medallions cooked in canola oil, giving it the unique taste associated with the restaurant. A single serving has 270 calories, and it comes with your choice of sauce. You may want to know that the sauce also adds extra calories to the meal, so there’s that.

The Chick-fil-A Waffle Potato Fries is a lot more popular than Hash Browns, and it’s much bigger. It’s made from cut potatoes fried in canola oil to make it crispy on the outside and tender on the inside. It also gets a sprinkling of sea salt for the taste.

The fries come down to 420 calories in all, but you also get your choice of sauce, which adds a couple more calories. If you’re up for a cruder and more filling version of the Chick-fil-A Hash Browns, here you go.

The regular Chicken Sandwich is good, but the Spicy Chicken Sandwich is interesting. It’s the same thing as the former, just seasoned with a spicy blend of peppers to justify the extra word in its name. It comes with the same dill pickle chips and it’s served on the same freshly bearded bun.

It has a few more calories than the original chicken sandwich, containing 460 calories as opposed to the 440 on the original. The calorie count may change if you choose to use one of the extras, which include different varieties of cheese, bacon, tomato, and lettuce.

What are the Healthiest Meals to Order at Chick-fil-A?

Pretty much all the items from the preceding section were from a list of the most popular items on the Chick-fil-A menu. While that’s a pretty fair way to determine the healthiest meals, there are many alternatives, one of which is the nutritional value of the food in question.

Talking about nutrition, Chick-fil-A does publish a list of its most healthy meals, updated every year. Here are some of the healthiest meals to order at Chick-fil-A.

Salads never fail to make it to a list of healthy foods, making it unsurprising to see the Spicy Southwest Salad here. The salad has your regular vegetables and is complete with spicy grilled chicken toppings, making it just as delicious as it’s healthy.

Chick-fil-A Kale Crunch Side is a serving of green cabbage and curly kale, hence the name.  The side is tossed with Dijord mustard vinaigrette with roasted almost toppings. It serves as an excellent side to Waffle Fries and many other items on the Chick-fil-A menu.

The Greek Yogurt Parfait consists of vanilla bean Greek Yogurt with no preservatives or flavors. It’s served with blueberries and strawberries, all of which come to 280 calories. The yogurt also contains 130 grams of protein, making it one of the healthiest Chick-fil-A items.

What’s the Most Popular Chick-fil-A?

There are several good meals at Chick-fil-A, depending on how you define “good.” This article has listed a couple of the most popular meals as well as the healthiest ones. It doesn’t matter what you’re looking for, you should find one or two here.

Is the cool wrap from Chick-fil-A healthy?

Yes.
The cool wrap is made with a variety of ingredients, including chicken, rice, and a variety of sauces. While all the ingredients are likely to be healthy, you need to consider the amount that you are consuming. A single wrap can contain up to 320 calories. If you are looking to make a healthy choice, you might order a side instead.

What does a Chick-fil-A meal include?

Chick-fil-A meals typically include a chicken sandwich, fries, and a drink.